Another year and it is the fourth in a row, it was held in Berlin the ownCloud Conference, place of meeting of all the contributors of this well-known cloud computing open-source application. And yeah, of course, the Solid GEAR team was there.

A long trip was waiting us in order to arrive to our destination. First of all a train to Madrid and later a plane that would land on Berlin, but all of us were looking forward to this day. On Friday, it was held a meeting dinner where old friend met but also a lot of new people that were for the first time in an ownCloud Conference. All of them shared burgers and beers and, of course, good conversation. 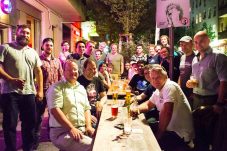 After registering in the conference, we received some oC merchandising gifts. We went to the room that held the talks in this first day. Solid GEAR played a leading role during this day because many of the talks were given by SG members. Let me summarice them!

David Velasco, Android developer, outlined  the features included during the last year in the oC app and gave an overall view of the new challenges to achieve in the future of the application. David emphasized the natural differences between the file synchronisation  on desktop and on mobile devices

Our mate Noelia Álvarez was the next one in stepping up to the stage, She shared with the audience of the conference everything that have happened related to the ownCloud mobile app for iOS. The new features of this app were heard with great excitement for all the public, like for example ‘Share with Others’ and ‘Available Offline’. 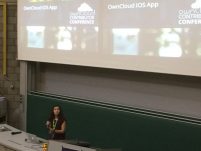 Talking about Quality stuff, Sergio Bertolín told us in his talk how previously, in ownCloud, it was possible that any developer could include bugs in important parts of the backend code. Those bugs could maybe propagate to the desktop and mobile clients, producing a waste of time in the client developers. We should improve this process. To solve it, we have included an extra testing-layer to the continuous integration. Jenkins runs them automatically in every single pull request and helps us to follow a process known as Behaviour Driven Development (BDD). The main tool we have used is the official implementation of Cucumber for PHP, Behat. 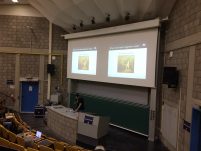 Jesus Recio talked about automated testing in mobile apps, to be more specific, about the user interface. He explained concepts about testing automation and two frameworks for mobile testing: Appium and Espresso, comparing the advantages and disadvantages of both of them. Finally, he also emphasised about the possibility of using Device Farms. 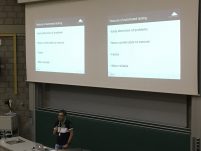 And in closing this block of talks, David Toledo explained several ways that the community has for contributing to ownCloud testing. It was shown several methods of how to set up an ownCloud server for deploying our testing environment, for example through Docker containers or using the appliances that ownCloud provides 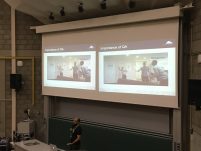 All of us agree it was a beautiful experience but also a growth opportunity in our professional careers in other aspects. That’s the reason why we want to thank ownCloud  for giving us the opportunity of participating as speakers in this conference. 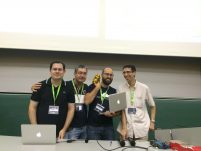 If you want to watch these talks or any other given by other speakers in the ownCloud Conference 2016, they are available in the following Youtube Channel.

On Sunday we attended to several talks. It is noteworthy the one gave by Holger Dyroff, ownCloud COO, which topic was about the future of ownCloud and where we want to move towards the product.

After the morning talks, it was taken the ownCloud Contributors Family Photo in front of the University entrance, and after it, we all ate outside mexican food. 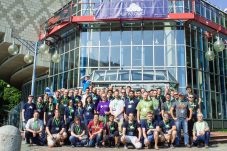 Late in the evening, both days of the weekend, we had dinner at a nearby beergarden and we had the opportunity of keep talking about all those subjects that we could not talk before during the ownCloud Conference at the University. 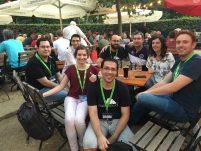 During the week, we were working ‘elbow-to-elbow’ with our pals that we often work  on remote, because ownCloud is a highly distributed project, based also in its community located all around the world. It was a great opportunity to have meeting face-to-face and we could resolve questions and align us for future goals. 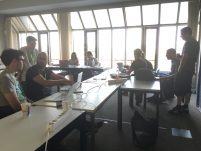 It was also possible to meet not only with community people, but also with ownCloud customers that came looking for information or asking for help to solve some questions.

From this post, I want to thank to the TU-Berlin for kindly hosting us those days. 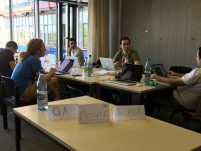 Back home – Thanks for all the fish

And finally the day of returning home arrived. We were tired due to the bustle of the previous days, but we were very happy about how the conference was and the experiences lived that week. All Solid GEAR team think that it has been probably the best ownCloud Conference we have ever been, but for sure, the following ownCloud Conference 2017 will be even better. 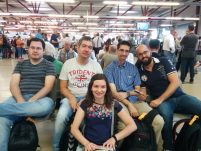 Thank you all and see you next year!