One of the most important steps when developing a software product is publishing it in stores since in that moment we will check whether the effort put into that product was worth it or not, if it likes to the users and if it achieves what we planned for it.

In the case of Android, imagine you have been working on a specific app during half a year and included awesome features, so you consider it’s time to show the app to the rest of the people, what should you do next? Well, there’s several options here depending on the nature of the product and your expectations about it:

Once you have the app published, it is pretty important to make our users happy and get good reviews which will help us to get more downloads.

In this blogpost, I will give you some clues about how to receive more and better reviews for your app in Google Play Store and monitor those reviews.

How can I get more and better reviews?

Firstly, we have to keep in mind that not paying enough attention to user reviews is not a good approach.

Answering reviews in Play Store takes some time and that’s the reason why some people might think the reward obtained is not worth it compared to the time spent, but many at first negative reviews could be improved by using simple and even predefined answers.

Most of the 1 star reviews are most likely not updated even after solving the problem. If we answer the users like below, at least we give them the chance to improve their experience.

2. Discuss about possible answers that fit each case

Answering reviews in Google Play Store shouldn’t be a task for just one person in your project, there should be more people involved in the process.

When the person responsible for answering the Google Play Store reviews doesn’t know exactly what to reply, I would recommend you to open a new discussion with other workmates to suggest and choose the better answer.

In case some reviews need go into more technical details, developers might be asked to build more specific answers.

3. Encourage your users to rate the app

When we are satisfied with how one of our apps is working, we do not usually write a 5 stars review for it on Google Play Store, so including a new dialog to remind your users the importance of their positive feedback is definitely a good idea.

The dialog below will redirect your users to Google Play Store so they can rate your app and detail their feelings about the app. 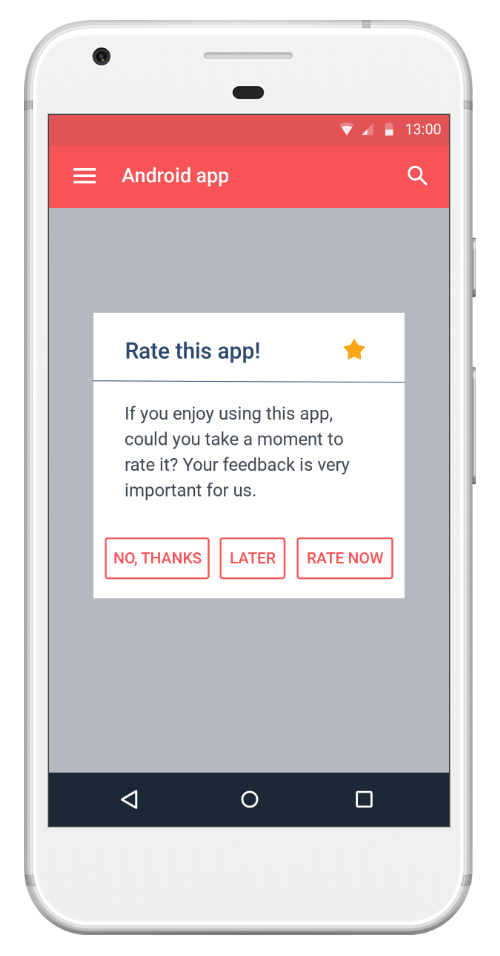 In every software product, there are releases in which just bug fixes are included, forgetting in some cases how important including user facing features is.

We all know there are some moments when this kind of releases may be difficult to avoid but we could move some minor bug fixes to the next version and include fancy and useful features that will reward our users while we keep working on polishing the app.

How can I monitor my users reviews?

Let’s see a couple of interesting diagrams that you can find in Google Play Console.

The next diagram shows the way our users ratings and reviews have been updated, including the effect our replies had on those updates.

As we can see, 50% of positive reviews were updates of previous ratings after reply them, making the average rating improve almost 1 star.

In the diagram below you can see an example of an Android app that increased the monthly average, being around 3 during January, February and March and reaching an average of 4.4 in April by following the steps we described in this post. 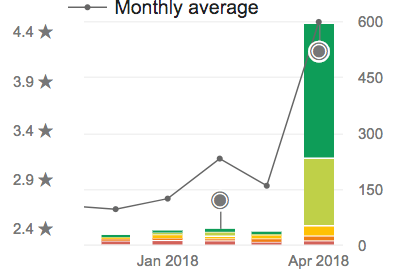 In this post, we have introduced apps publishing concepts, how to get more and better reviews in Google Play Store and monitor them with a couple of options in Google Play Console.

If you have any question or want more information about any part of this blogpost, do not hesitate to comment below.

1 thought on “Keys to make your Android app well rated”